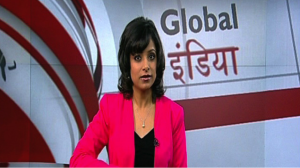 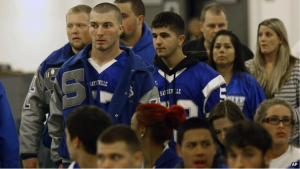 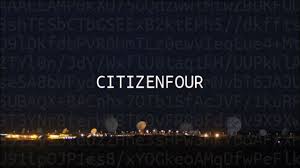 Hope you all enjoyed the field trip.   As some of us discussed after the film, it does indeed reveal the existence of a hitherto unknown second leaker within US intelligence, who revealed the figure of 1.2m on government watchlists.  Apparently those details were redacted until the film’s premiere.  There’s a New Yorker profile of Laura Poitras here, if anyone wants to know more about her methods.

Ahead of Monday’s class, our class guest, BBC Journalist Divya Arya, asks that you read the following pieces so we can discuss how violence affects women’s lives and reporting on that

1) India’s Long, Dark and Dangerous Walk to the Toilet (BBC)

2) Why Indian Women Are Being attacked On Social Media (BBC)

3) Benghazi and the Bombshell (NY magazine)

Do make sure that you have questions for Divya about her work.  And remember that projects will be due on Dec 1st and 3rd, so please start collaborating with your group members to make sure you have something to present by then! Pic courtesy of BBC. 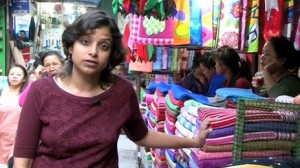 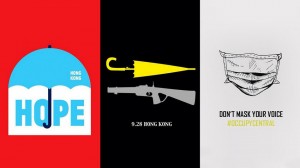 Big story in the WSJ today.   Here’s a Washpo summary for those who can’t get behind the firewall. 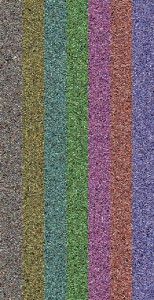 Being stopped at Detroit airport because his name was on a terrorism watchlist inspired artist Hasan Elahi to create this tapestry, made up of 32,000 photos of “the buildings he’s visited, the beds he’s slept in, the food he’s eaten, the toilets he’s used, the roads he’s travelled on.”  More on surveillance art in this fascinating piece in The Intercept.

For Monday, please read the following:

Also please write a blogpost on the institutional factors guiding journalists within the US.   How much freedom do they have to operate?   What kind of unseen pressures are there on US journalists to stay within the Bubble?  What happens to those who transgress?  How does the Obama administration compare to its predecessors?  (For Monday 17th Nov) 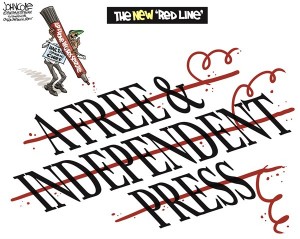 On Monday, Petra Bartosiewicz came to speak to our class about the US War on Terror. 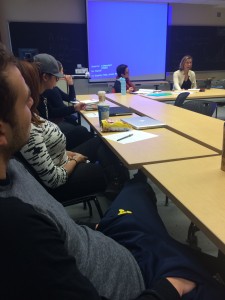 Students listen intently as Petra Bartosiewicz lectures on her experience.

Petra is a freelance writer who “got her start in journalism at The New York Observer and later attended the Columbia University Graduate School of Journalism.” “She has written for numerous publications, including The Nation, Mother Jones, The New York Times, Salon.com and Hustler, and has worked in radio for the weekly program, This American Life.” She has won several awards and fellowships for her writing. She is currently working on a book called “The Best Terrorists We Could Find,” “an investigation of terrorism trials in the U.S. since 9/11,” set to be released in 2015.

Petra has established herself as a niche reporter, covering the one issue in depth. She has become somewhat of an expert on the War on Terror. She referred to herself as a “legal beat reporter without a newspaper,” in that she covers everything on the subject from a legal perspective, but because she remains freelance, she can sell her individual stories to different publications. For instance, she explained how she came to write a few articles for the Associated Press – she was simply present at the right place and time, they were understaffed, and she was knowledgeable on the subject.

Her writing tells a narrative that criticizes the American government for the targeting of marginalized yet criminal people and coercion into fake terrorist plots. However, she was quick to clarify that she did not set out with the agenda to critique the U.S. government. She explained that she uses primarily government documents and facts to build a story, and then she allows the reader to draw their own conclusions about what happened. This is imperative in such a sensitive topic as terrorism, where “ambiguity is the rule” and one may never know the whole truth.

Petra’s body of work covers ethical issues such as the effect of the War on Terror on civil liberties. Her talk with us centered largely around related themes in her work. She discussed what she called a “preventive paradigm,” in which the U.S. government seeks to take preventative action against potential terrorists despite the fact that this goes against everything that is historically upheld in the American justice system, that one is innocent until proven guilty. We further discussed the conflict between the War on Terror and due process, particularly in that due process is being threatened by these preventative counterterrorism actions.

Thank you, Petra, for taking the time to meet with our class! We expanded our knowledge and broadened our minds as a result of our discussion. Your insight was invaluable to our learning. 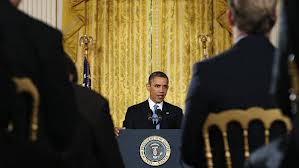 That’s one statement made by USA Today’s Susan Page, which we will be discussing on Wednesday.  The reading is:

1) The Obama Administration and the Press  (CPJ)

And for more on our fantastic class guest, Petra Bartosiewicz, her website is here.

Assignment for tomorrow:  How has your country been affected by the War on Terror?  In what way did it reshape its ties with the US? 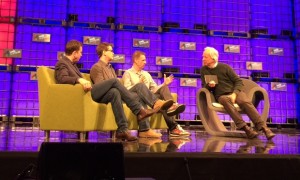 That was one of the takeaways from a panel at the Web Summit conference, where Storyful chief exec Mark Little said, “Social media has proved to us that the breaking news model is broken for good. It’s broken as a concept.”

“As a business, it’s a really good business. But the concept that you, with the flashing ‘breaking news’ on the screen are going to be the first to break something is completely bullshit, because someone out there has witnessed it.”

“The key thing for us is to find the first piece of content that will define a story: the video, the tweet… we have 40 journalists looking in real-time for the original source,” he said.  “For us the most important thing is who’s the person on the ground with the camera-phone standing there right now.. Authenticity has replaced authority as the new currency of this environment.”

It’s worth reading this Guardian piece which underlines many of the themes we have been discussing, including the bypassing of traditional news organizations, the overabundance of content and the role of journalists as filters.

Our guest on Monday will be Petra Bartosiewicz, so please do the following before class:

1) Listen to her This American Life “The Arms Trader”

2) Read one of her Harper’s Pieces, here or here.

3) Read her LA Times Editorial, “A Permanent War on Terror”

4) Draft three questions for her.

Have a nice weekend!

And I’m sorry to say it wasn’t even a listicle!  If you want to see the Buzzfeed way, click here.

A couple of longish reads before Wednesday’s class, but I think you’ll find them interesting:

2) Dealing with Assange and the Wikileaks Secrets (NYT)

Before Wednesday, write a blogpost on the Wikileaks revelations on your country.  Search through the coverage – and the databases at Cablegate– to find  one major disclosure through Wikileaks. Explain why it was relevant for your country, and what kind of fallout the release of the leaked cable had any fallout for the government of your country and its relations with the US.