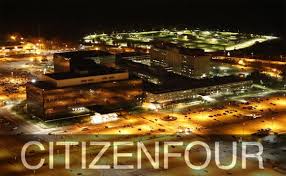 “At this stage, I can offer nothing more than my word,” declares a cool voice. “I am a

senior government employee in the intelligence community…and contacting you is

extremely high risk.” Laura Poitras, the director of this film is reading

While the content of these messages could stand on its own as a thrilling tale, the

between documentary, action flick, and even investigative journalism.

Going into the theater, I was expecting to learn a few things, be entertained, and

maybe even have reason to question the extent of the role of the U.S. government in

anti-terrorism efforts. However, after watching it, I was shocked to learn the extent

of the civilian monitoring. Poitras follows an 8 day interview with Snowden and

Anything can be intercepted and used to spy on citizens, we soon learn. Snowden

first seems quite paranoid as he types his password under a heavy blanket. He

unplugs his hotel phone because it can be used to listen in on private conversations.

But as the story advances and as Snowden discloses more and more, we see that his

Surprisingly, Snowden appears to be a well socialized, normal man, if one who feels

like he and the rest of the U.S. citizens are being taken advantage of by the

government. He doesn’t want to be the center of attention, nor does he even want

the newspapers to mention his name until the story has broken. This shows his deep

commitment to the public interest and differentiates him from Julian Assange,

founder of Wikileaks, who enjoyed his fame and used his skills to garner personal

At one point, the hotel fire alarm goes off and the tension in the hotel room is

palpable, even through the screen. Snowden glances around the room uneasily and

legitimate. It turns out to have been a test. The tension fades, but the memory of it

remains etched in the minds of both the viewers and Snowden.

After the release of this movie, Poitras found herself on a Department of Homeland