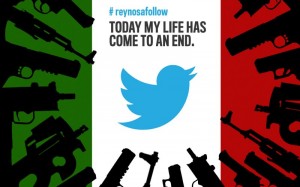 There’s an appalling story from Mexico about how a citizen journalist, Mario del Rosario Fuentes Rubio, was killed by gunmen linked to Mexican drug cartels after being kidnapped.   They took control of her twitter account, posting this tweet:

# reynosafollow FRIENDS AND FAMILY, MY REAL NAME IS MARÍA DEL ROSARIO FUENTES RUBIO. I AM A PHYSICIAN. TODAY MY LIFE HAS COME TO AN END

And then they tweeted pictures of her body.

In other citizen journalism news, many young Hong Kong Chinese are documenting what is happening on the streets right now.  I enjoyed this BBC profile of an 18-year old citizen journalist, Irene Li.   For an update from the streets of Mongkok, check out the twitter stream of @PRhacks, who I interviewed for a New Yorker piece on the use of thugs in HK.  Since then, he has since started live-streaming onto the World Crypto Network youtube site. Below is some great video taken by a regular journalist, Nathan Mauger, which gives a real sense of what life is like for the #occupycentral protestors in Mongkok.