One of the big twitter stories of the week – aside from its stalling user base and 11% stock drop – was the first tweet sent by a new user, one Elizabeth R.   Her tweet welcomed the masses to the opening of a new exhibition at the Science Museum (pic courtesy of NBC news). 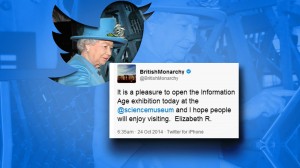 It took just four minutes for Her Majesty to be trolled, by an anti-monarchist, who wrote, “Welcome to Twitter!  Abdicate.”   Things got worse, when a reply telling the queen to f*** off was broadcast on the BBC.   And then doubters raised questions about whether the queen had in fact sent her own tweet.    Her spokesman shrugged these questions off, blaming ‘processology’.  As if that were really a thing.

2) Why Israel is Losing the Social Media War Over Gaza (Channel 4:  WATCH the video)

Following our discussion today, this article – Ferguson Reveals a Twitter Loop – is also of interest, since it touches upon many of the same issues we mentioned, but giving concrete examples.