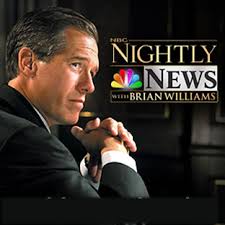 NBC Nightly News Anchor Brian Williams is in serious trouble.    He’s had to apologise for falsely claiming that he was on a helicopter downed by Iraqi rocket fire in 2003, a claim he had publicly repeated on friday.   The scoop came from Stars and Stripes, which quoted his letter of apology saying,  “I spent much of the weekend thinking I’d gone crazy.  I feel terrible about making this mistake.”  He said he had “misremembered” what happened.

The apology still leaves many questions unanswered, with some still saying that Williams misrepresented what happened.  But now his credibility is badly damaged, and Twitter has been whooping it up with #BrianWilliamsMisremembers

"So I told #leftshark 'Don't worry about the choreography, just go with it'" #BrianWilliamsMisremembers pic.twitter.com/NRM9GUYTPR

Realise that I forgot to name a blog of the week last week.  I enjoyed Yardain’s post on access to information in Qatar, especially the time he spent poking around the government website.  This week, I liked Savannah’s post on how four years of drought in Syria may have been a factor behind the revolution.