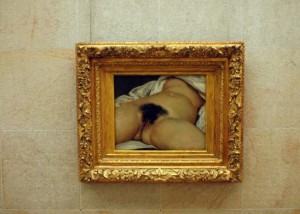 This 19th-century painting by Gustave Courbet is at the centre of a dispute about Facebook’s censorship, after the social networking site closed down a French teacher’s account for posting the picture, which it deemed pornographic.  Now the man is suing Facebook for violating his rights to free speech and a Paris court is giving him a hearing.  The Verge wins the prize for the clickbait-iest headline, while Slate‘s take on it is as follows:

“Upon first glance, this news might seem like a big win for free expression. Facebook’s indecency policies, after all, are absurdly arbitrary and puritanical, calling for the censorship of nude drawings and breastfeeding photos. And a Courbet fan has a much better chance of winning a free speech claim against Facebook in France than in America: While the First Amendment only applies to government censorship, France’s free speech laws can sometimes be used to punish private censorship, as well…..But in reality, Thursday’s decision could clear the way for civil libertarian nightmares down the road.  European countries generally take a very lenient approach to free speech, granting the government broad powers to censor any expression deemed hateful. Allowing European courts to monitor the online speech hosted by American companies would ultimately result in punishment of unpopular views and chilling of vital expression”

In other censorship news, Peter Hessler wrote a magnificent New Yorker piece about travelling around China with his censor, which adds nuance to the debate.  Also, I can’t help loving this Onion piece about how grateful Chinese internet users are that censorship protects them from “endlessly looping GIFs of sitcom actors rolling their eyes or giving each other high-fives” and “overfiltered photos of food truck tacos or videos of high school students asking celebrities to accompany them to prom” (NOTE: THIS IS SATIRE).

ICYMI the Guardian had a great piece on abuse in a ‘black jail’ in Chicago that was far more reminiscent of pieces we are used to seeing from China or Russia, rather than the US.

READING (We will be discussing the following in class on March 10th, so woe betide anyone who hasn’t read them.)