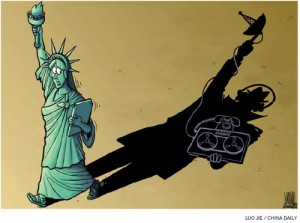 For the sake of novelty, above is a cartoon from the China Daily (note: not an unbiased source) on press freedom in the US, which accompanied an editorial called Myth of US press freedom.

For next Tuesday, please read:

The Obama Administration and the Press (CPJ)

Where’s the Justice at Justice? (NYT)

BLOGPOST: We have spent a lot of time examining how journalists operate in the different countries we have chosen to blog about.  What about journalists in the US?  How much freedom do they have to operate?  Write a 500-word post about press freedom in the US in 2014 using sources such as the World Press Freedom Index, Reporters Without Borders and Freedom House.   Try to analyse the factors behind any change in US ranking when it comes to press freedom.