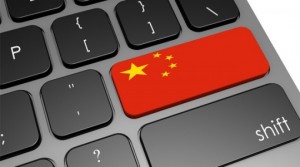 China has launched its newest censorship tool, which has been dubbed the Great Cannon.  Unlike the Great Firewall, which stops Chinese inside China from accessing online news, the Great Cannon takes aim at websites outside China. As the Guardian writes,

The first use of the Great Cannon came in late March, when the coding site GitHub was flooded by traffic leaving it intermittently unresponsive for multiple days. The attack, using a method called “distributed denial of service” or DDoS, appeared to be targeting two specific users of the site: the New York Times’ Chinese mirror, and anti-censorship organisation GreatFire.org.

Writing in Fortune, Robert Hackett said China had “weaponised its internet”, and it could even use these means to disseminate malware.   The term was coined by a team at Citizen Lab, who wrote this report, concluding:

Conducting such a widespread attack clearly demonstrates the weaponization of the Chinese Internet to co-opt arbitrary computers across the web and outside of China to achieve China’s policy ends.  The repurposing of the devices of unwitting users in foreign jurisdictions for covert attacks in the interests of one country’s national priorities is a dangerous precedent — contrary to international norms and in violation of widespread domestic laws prohibiting the unauthorized use of computing and networked systems.

For the technically minded, here’s an illustration from Citizen Lab. 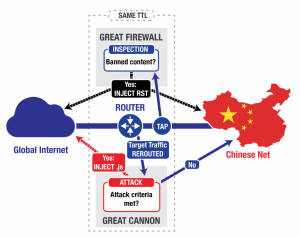 Meanwhile Turkey has blocked Facebook and Twitter this week, and there are more concerns about Facebook’s plans to to host news directly from partner organizations, especially given Facebook’s record.

Close watchers of the social media site know that most of the time you only see around 6 percent of what your friends post. For organizations who want their followers to see their posts, it’s even less…..Worse, that filtering algorithm has increasingly turned into a pay-for-play system from news organizations. Want more people to see your content? Then “boost” your posts by shelling out some money. This already has turned Facebook into something of a two-tiered content sharing system, where the rich will inevitably see their stories go “viral” (if you can even call it that) much faster than will the poor. This inequality gap will only be exacerbated as more news organizations move over to publishing directly and the pressure—whether it be overt or implied—on those holding out increases.

Final presentations begin tomorrow.  The schedule is as follows: